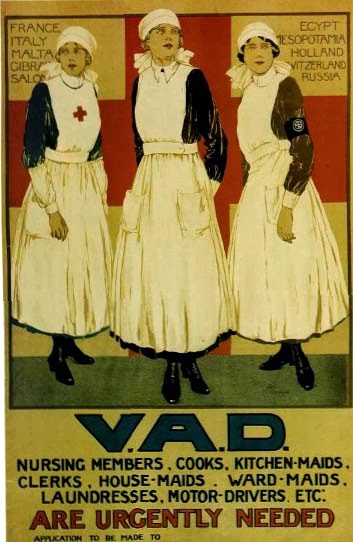 “Short of actually going to bed with [the men], there was hardly an intimate service that I did not perform for one or another in the course of four years,” wrote Vera Brittain, one of the most renowned Voluntary Aid Detachment (VAD) nurses of the First World War, in Testament of Youth. Like Vera, VADs were generally from genteel, sheltered, and chaperoned backgrounds, because only people of means could afford to pay for the courses and work for free.

Some were aristocrats, like Lady Diana Manners – reputedly the most beautiful woman in England and expected to marry the Prince of Wales. Her mother was opposed to Diana’s becoming a VAD, and “explained in words suitable to my innocent ears that wounded soldiers, so long starved of women, inflamed with wine and battle, ravish and leave half-dead the young nurses who wish only to tend them.” The Duchess gave in, but “knew, as I did, that my emancipation was at hand,” Diana says in her memoir, The Rainbow Comes and Goes, and admits, “I seemed to have done nothing practical in all my twenty years.” Nursing plunged her and other young women into a life-altering adventure.

Growing up with servants, many of these girls had never had to wash a plate or boil an egg. But with only a few weeks of training by St. John Ambulance in First Aid and Home Nursing, women over 20 became qualified to work under the guidance of professional nurses, who usually resented these amateur “do-gooders”. Of course, many lied about their age!


While VADs spent much of their time changing linens, sterilizing equipment, serving meals, and so forth, they were just as readily asked to hold down the exposed intestines of a mortally wounded soldier, as was Canadian Doreen Gery on her first day in a British military hospital. Her protest to the Nursing Sister that she would rather die than do that, earned the retort, “Well, die then! You’re no good to me if you can’t do the work!” Like other VADs, Doreen valiantly got on with the job. Giving up was considered the equivalent of cowardice in a soldier.

In makeshift hospital cities of tents or wooden huts near the battlefields there was no running water, rats scurried about under the beds, and the tents sometimes collapsed in fierce gales that howled off the English Channel during two of the coldest winters in living memory. Wounded often streamed into these base hospitals filthy and crawling with lice. One VAD, after two weeks of unending work, discovered that she had “collected some of the notorious ‘grey-backs’… when I was brushing my hair, and I was so exhausted that I just collapsed in tears. It seemed the last straw.”

VADs who later became famous included American aviatrix Amelia Earhart, who worked at the Spadina Military Hospital in Toronto, and Agatha Christie, who dispensed drugs, thus learning about poisons, which she later used in writing her mysteries.

In ElusiveDawn, one of my intrepid characters becomes a VAD, and sees service in England and France, as did 500 other Canadian women.