Only 1 week left to get the Kindle and kobo versions of The Summer Before the Storm at the special price of only $2.99! Visit this website for links to the e-books.

They trembled, couldn’t sleep, were terrified of loud noises, suffered from headaches, dizziness, ringing in their ears. Some lost their memory or the ability to walk or talk. But they were often considered cowards or malingerers. One doctor said that shell-shock was a "manifestation of childishness and femininity". Treatment included electro-shock therapy, hot and cold baths, massage, daily marches, athletic activities, and hypnosis.
Officers were sometimes given psychoanalysis as well, especially at the famous Craiglockhart War Hospital in Scotland, which treated poets Siegfried Sassoon and Wilfred Owen. Read Sassoon's poem "Survivors", about shell-shocked soldiers, which he wrote while he was there.

Shell-shocked officers were said to have neurasthenia while the men (usually from the "lower classes") were classified as hysterics.

Medical evidence showed that shell concussion could cause neurological damage - tiny hemorrhages in the brain and central nervous system. But men exhibited symptoms of shell-shock even when they had not been exposed to artillery fire. In 1916, a distinction was made between those who were shell-shock wounded (W) and sick (S). Wounded was honourable, and entitled the victim to wear a “wound stripe”.  The others received no stripe or even pension.

In 1917, the term shell-shock was no longer allowed. Patients were classified as Not Yet Diagnosed Nervous (NYDN). The men called it Not Yet Dead Nearly. It’s now referred to as Post Traumatic Stress Disorder (PTSD).

Understandably, many of my characters suffer some degree of shell-shock. 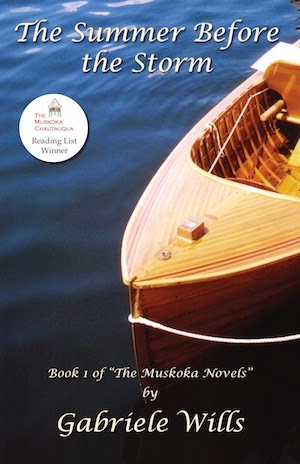 "It was the whisper that started their war. That's how many at the table that evening would recall the summer of 1914."

So begins The Summer Before the Storm, the first of the Muskoka Novels. Since it's two weeks until the 100th anniversary of Canada going to war, there's a special price for the Kindle and kobo versions of The Summer Before the Storm. Only $2.99! Don't miss out on this limited-time offer, which ends Aug. 5. Visit this website for links to the e-books.
Posted by Gabriele Wills at 11:09 AM No comments:

Sex and the Soldier


Lord Kitchener wanted men to enlist, but he also advised them, "In this new experience you may find temptations both in wine and women. You must entirely resist both temptations, and, while treating all women with perfect courtesy, you should avoid any intimacy.”

But as Robert Graves wrote in his classic memoir, Goodbye to All That, "There were no restraints in France; these boys had money to spend and knew that they stood a good chance of being killed within a few weeks anyhow. They did not want to die virgins.”

Canada and Britain’s top Ace, Billy Bishop, disclosed his affair with a French girl to his fiancé before their marriage in 1917. In Tapestry of War, Sandra Gywn explores Major Talbot Papineau’s correspondence with a close female friend. “In a manner that for the time was uncommonly frank, he’d confessed much about his sexual transgressions in London.” Papineau was killed at Passchendaele in 1917.

What is surprising is that the military sanctioned visits to licenced brothels, as sex was considered a physical necessity for the men. The "maisons de tolérance" with blue lamps were for officers, and red lamps, for the other ranks. However, no sex education or prophylactics were provided. An astonishing 400,000 cases of venereal disease (VD) were treated during the war, according to the BBC.

The rate of VD among the Canadian troops was almost 6 times higher than that of the British, and was 1 in every 9 men. Not only were the Canadians far from the influence and advantages of home, but their pay was also 5 times that of their British counterparts, so they had ample funds to buy sex and wine.

Troops who ended up in specialized VD hospitals were docked their pay, while officers had to pay 2 shilling and 6 pence for every day they spent in a VD hospital, and also lost their field allowance. Soldiers with VD were not eligible for leave for 12 months. But contracting VD was also a way to escape the horrors of the trenches, at least for a while.

My first two Muskoka Novels, The Summer Before the Storm and Elusive Dawn, explore the theme of wartime morality.

Hospitals Flapping in the Wind


Many of the military hospitals in France and Belgium, including those well behind the lines on the French coast, housed the wounded (and staff) in tents. The winters of 1916-17 and 1917-18 were brutal - among the coldest in living memory - which made life miserable as well as difficult for staff and patients alike. These tents were occasionally blown down in storms, which were all too frequent on that windy north coast. Three hospitals were virtually levelled in a gale in August, 1917.

Some of these tented and hutted hospitals had 2000 or more beds, and with the additional accommodations and facilities required for medical and support staff, were like small towns.

During an offensive, a hospital like the 1st Canadian General at Etaples could have 600 admissions a day. In 1917, that hospital alone admitted 40,500 wounded and ill men. It's delightful to see that there was still time and care taken to bandage a dog's paw, as seen in the photo above.

Although seemingly well behind the front lines, the base hospitals were occasionally hit in bombing raids. During one on May 19, 1918, over 60 staff and patients were killed and 80 wounded at the 1st Canadian General, while there were another 250 casualties among the other hospitals in the Etaples district. Contrary to the Geneva Convention, these hospitals had been placed next to vital military installations that were legitimate targets for the German bombers. The middle and right graves at the front of this photo are those of a Canadian doctor and nurse killed in that attack.

Some of my characters work in these hospitals in Elusive Dawn.

The Art of War

My characters enjoy spending time with real people, so it’s understandable that ambitious Jack Wyndham is thrilled to meet powerful ex-pat Canadian millionaire, British MP, and newspaper baron, Sir Max Aitken, who becomes Lord Beaverbrook in 1916. A self-made man, Aitken admires Jack’s cleverness and business savvy, but also recognizes his artistic talents, and hires him to be one his war artists.

Farsighted and always a staunch Canadian, Aitken established and financed the Canadian War Records Office in 1916 in order to document Canada’s war efforts in film and photographs, despite initial opposition from the War Office. Troops and other personnel, like nurses, were not allowed to have cameras overseas, so these official photographers produced vital historical records.

Beaverbrook also established the Canadian War Memorials Fund, hiring artists to capture Canadians on the home front – in the fields and factories – as well as in the trenches. Nearly 1000 paintings were created by artists such as A.Y. Jackson, Frederick Varley, and Arthur Lismer, who would later become members of the Group of Seven. The “War in the Air” painting above depicts Canada’s and Britain’s top Ace, Billy Bishop, in combat.

After decades of lying sadly neglected and unseen in the vaults of the National Art Gallery, these treasures are now housed at the Canadian War Museum, where some are on permanent display.

In Elusive Dawn you can join Jack Wyndham for a country house weekend at Max Aitken’s estate, Cherkely Court.